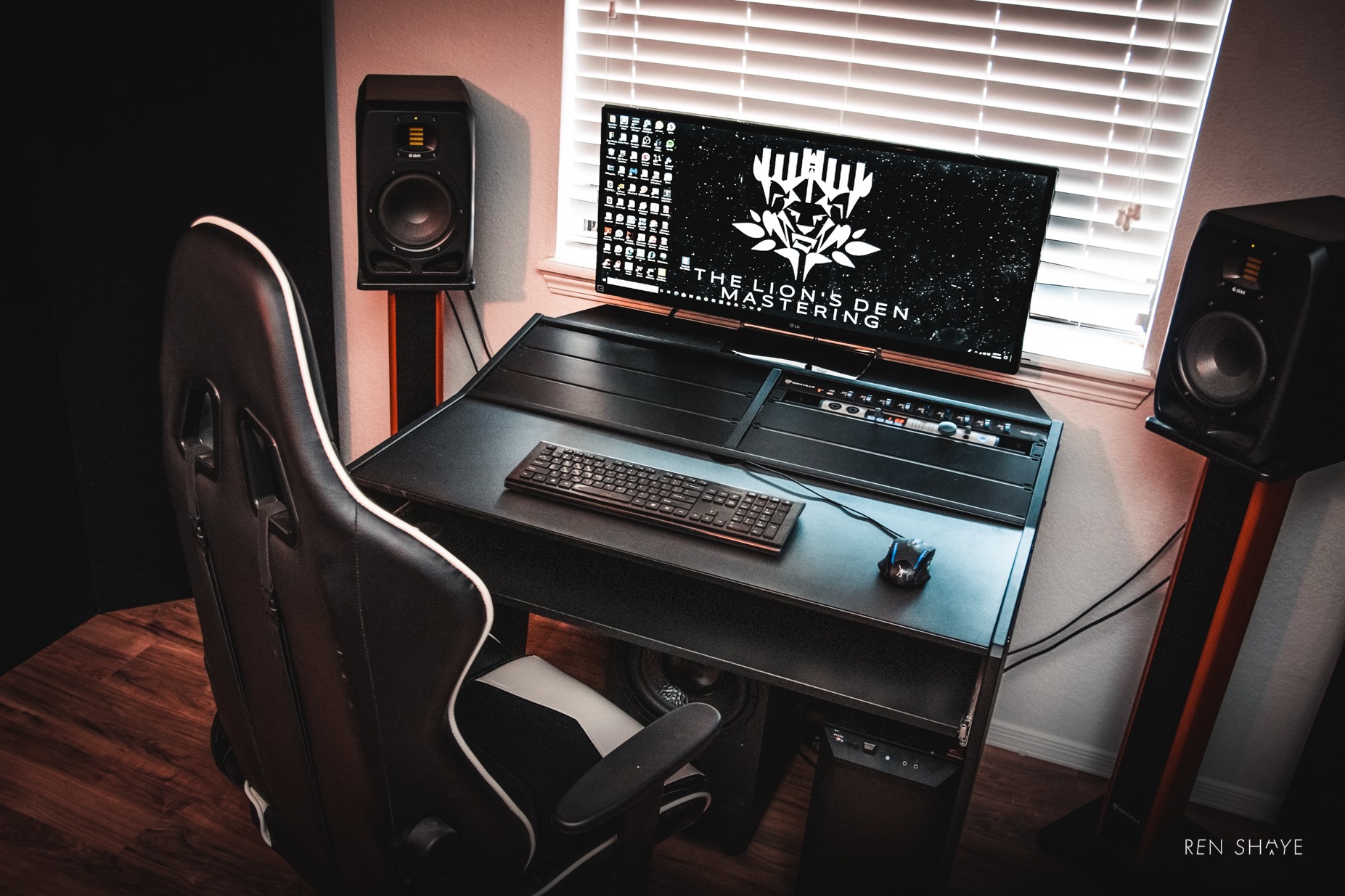 By Klaus HillJuly 22, 2020Uncategorized
No Comments

Let’s Speedrun A Studio Build!
I was recently offered the once in a lifetime opportunity to assist on implementing a studio build of my own design during an Arizona heat wave, so naturally I leapt at the chance. If you’ve never handled fiberglass and done joinery in 110 degree weather it’s worth trying once. The client needed a quick turnaround on this job as his clients were patiently waiting for him to be up and running with looming deadlines. Due to time restrictions we opted for a DIY approach. End to end this was a week and a half process from initial contact to completion.
The space forGreg Oerlemans’ The Lion’s Den Mastering is a very familiar challenge. 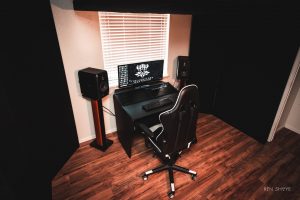 A 10’4” (L) x 11’2” (W) x 8’ (H) room, which is neither Bolt nor Bonello compliant, and which comes in at only 920 cubic feet of volume, roughly two thirds of the Cox criteria for minimum control room volume. What some would call an impossible room. As a result of these factors, and some interesting things I found in the preliminary measurements Greg sent to me, I opted to do my first on site alignment since March.
What I noticed in the measurements he had sent me was a strikingly well correlated left/right frequency response, indicative of a potential for imaging strength once the reflection free zone was optimized. I knew that I could get a better imaging outcome by aligning the room in person instead of doing so remotely. Furthermore, the modal activity tracked very tightly with that in the simulations of his room. This is quite often not the case when retrofitting an existing residential build due to varying wall composition (interior vs. exterior walls) causing changes in impedance which shift modal node/antinode structure and even corner frequencies. Fortunately for Greg, both of his sidewalls AND back wall are interior walls. The symmetry of sidewall composition yields the symmetry in left/right frequency response, the rear wall provides a “leaky” boundary for deep subrange to pass through unimpeded instead of exacerbating modal build up of this tiny room, and the dense front wall construction provides better acoustic loading of the system for the room. Nice. The closet was tested with the door open and closed, and subsequently the door was removed entirely due to pseudo-Helmholtz activity, most notably at 60hz.
The first priority for the design was a well reinforced reflection free zone. While the bass range was bound to have some post-treatment frequency response delta on account of Bonello noncompliance and volume concerns, the imaging could easily be the star of the show for the room. For anyone just tuning in, the reflection free zone is the area directly surrounding the mix position. It encompasses the sidewall bounce position, the ceiling bounce, and the front wall bounce. These bounces result in an out of phase, delayed version of the direct signal arriving at the mix position and, in doing so, causing destructive interference which heavily attenuates or removes certain frequencies. These phase cancellations cannot be resolved with DSP. By adding more level at the frequency in question you add level to not only the direct signal, but also the bounce in equal proportion, maintaining the cancellation and wasting system headroom. By resolving these sources of speaker boundary interference (SBIR), you remove anomalies in the phase response and create better symmetry between the left and right speakers. These two conditions are the core of perceptual imaging strength.
The composition of the reflection free zone is as follows. Sidewall trapping consisted of 3.5” Roxul Safe n Sound, with a 3.5” airgap. The cloud was a composite of 3” SnS backed by 9” of R30 pink fluffy against the ceiling cap, and comprised a sizable portion of the ceiling (6’x4’) to double as a modal control module in addition to strengthening and extending the RFZ around the mix position. The rear wall module was of the same composition and size for length mode control and rear wall bounce suppression. Corner traps were ALSO of this same composition, with a 2’ length across the facing. Front wall treatment was considered and subsequently rejected due to there already being sufficient sabines of absorption in the room, and my suspicion that the front wall bounce would go right out the window (I was right). The material choices in this job were largely dictated by availability in Greg’s area, but the outcome is quite good.
As a side note, there is a point rarely made regarding acoustic modules and diffraction which was relevant to my approach for this build. Diffraction is a phenomena that occurs when sound encounters an obstacle. Depending on the wavelength of that sound and the dimensions of the obstacle it will do one of two things, bounce off of it or bend around it. In the case of low frequencies this obstacle must be larger for it to bounce off/pass through it instead of taking the path of least resistance around the object. When buying acoustic modules off the shelf or building your own you should consider more than just the absorption coefficients of the material. During lab measurements of products a VERY large array of them are utilized to remove (among other things) diffraction from the equation. You will not see the same low end results in situ unless they are sufficiently large in order to prevent diffraction from altering the low frequency efficacy. This is doubly true of air gapped materials where the air is intended to create a mass air mass system to extend absorption coefficients, but this can only be accomplished when the air spring does not have a flanking path bypassing the requisite impedance changes which occur when sound pressure passes through multiple mediums of varying density. Long story short, if you’re trying to suppress lower frequencies, especially with air gaps, flush your acoustic modules together or make them taller/wider.
Initial best positions for mix/speaker/sub locations were established before treatment was installed, and amendments were made as necessary. A series of measurements were taken as each module was added to the room, in the interest of avoiding back tracking or painting ourselves into a corner with regards to monitor/sub placement. I highly recommend everyone to get into this practice, it will significantly cut down on troubleshooting time when weird things happen post-build. What I found over the course of these iterative measurements was consistent improvement culminating in an agreeable final result. 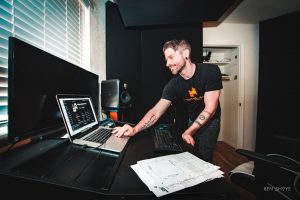 Most metrics fell within or near critical listening spec. The excess group delay is the flattest I’ve pulled off since Detox Unit’s new room. The RT60 is not only consistent and within spec, but consistent with my target down to 60hz. Outside of desk bounce the energy time curve also conforms to spec. Due to lack of modal support in one third octave range due to the dimensional ratio of the room, and residual modal ringing in length/tangential modes there is still work to be done as evidenced by the waterfall plot. I had intended to add some tangential mode trapping in the ceiling/wall corners to reign in additional anomalies in the 120-170hz region, but due to time restrictions this will be a future endeavor. I also intend to supplement the rear wall treatment with membrane traps of my own design to better control the fundamental length mode ringing at 60hz. Despite this, a bit of light DSP in the mains corrected most of my frequency response concerns until a more organic resolution is feasible. The imaging of this room is world class for nearfields, and the house curve conforms precisely to the client’s tastes.
In closing, quite a lot was accomplished within the span of 72 hours. Still more to be done, the room isn’t perfect, but considering this was executed in such a short amount of time using a raw materials budget of $1000, that should tell you something about the potential of these tiny rooms. The client is thrilled to have a room accurate enough to work in, I enjoyed the challenge and listening to music in the space after the final alignment was completed. Also, I’m exhausted.
Big thanks to Greg for his hospitality, and to Ren Shaye for her help with upholstery, and photography/videography of the build process.
1
1