By Klaus HillFebruary 23, 2016Uncategorized
No Comments

Italian software developers, Acustica Audio have a reputation for making digitally sampled models of analogue equipment. Their technology, most widely known in the form of the Nebula platform,allows them to sample the sound of specific hardware units, and thus recreate their behaviour in software. This is brute-force sampling, where in contrast to some software modelling techniques, they don’t rely on extrapolation, additional saturation or simulations of what a circuit might do in a given setting. That said it’s not totally simple, and Acustica have amassed a great deal of experience and thus optimisation over the years they have been doing this. Historically Nebula has remained rather ‘niche’ due to some ‘quirks’ associated with the technology – This sort of sonic quality comes at a price in terms of CPU usage, ease of use and familiarity (more on that later). But lately, Acustica have moved in a more mainstream direction with their Aqua series – plug ins which feature the same sampling approach, and thus the sonics for which Acustica are held in such high regard, but presented in the more familiar, accessible form of VST, Audio Unit and Pro Tools AAX plug ins, for both Mac and Windows. The series is home to some extraordinarily good sounding equalisers, not least of all the latest offering – White.

To explain White the software, it might help to first discuss ‘White’ the hardware – The WSM PEQ 2.0, a custom-made, solid-state, Pultec-style passive equaliser with a few twists on the classic theme:

The WSM PEQ 2.0 was developed by White Sound Mastering in Florence. Its solid-state gain stage lends rather more flexibility than the soft, pillowy character of the valve stages in a classic EQP1A – Anyone who’s spent much time with the originals will know that the magic of those equalisers, that euphonic beauty they impart, can be the wrong thing on some material, where clarity and purity may be required. The WSM box takes some of that broad, effortless, smoothness, and combines it with the precision of an SSL style gain stage – a combination which will suit classic and modern sounds alike, particularly in a mastering context.

The unit allows for different frequencies to be assigned to the low-frequency cut and boost controls – the original Pulse Techniques circuit offers one LF frequency selection switch, with the cut and boost applied at the same frequency. For those not familiar with this rather odd-sounding arrangement, the differing shapes of the cut and boost curves result in a boost around the set frequency, tempered with a resonant dip above – This results in a tightening of the boost, but it can be rather limited in scope. The PEQ’s independent frequency selections allows the user more control over exactly how the low end is shaped – a welcome added flexibility. The high frequency boost and cut stages behave in the familiar Pultec fashion. The analogue unit provides perfectstereo matching and recall by means of switched controls throughout. 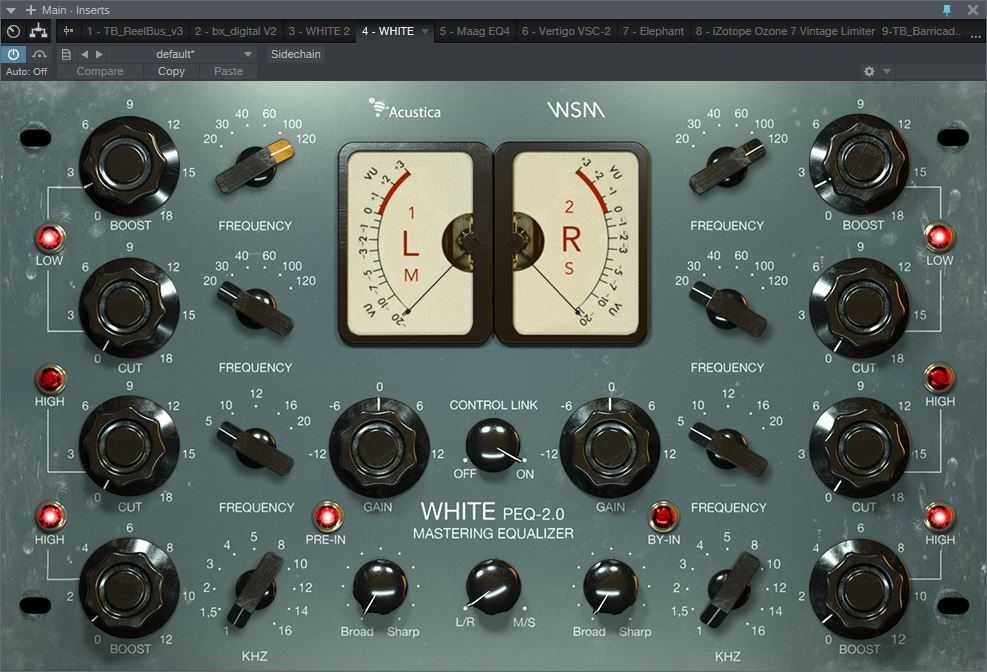 So how does White, the plug in differ from the WSM hardware. Well, in practical terms it allows automatic linking of the left and right controls, and an MS mode. You can also switch the sound of the gain stage in and out. The plug in offers two interfaces – a blue, Pultec style with the familiar bakelite knobs, and a reproduction of the actual fascia, an elegant, understated black faceplate with black knobs.

But we’re not really here to talk about what it looks like. We’re here to talk about what it sounds like. And it sounds really unbelievably good. It’s capable of exactly the sort of solid, analogue definition that has us scouring the comparison sites for the best credit card deals. Those Pultec low-end curves are on tap here, but as discussed above you can go further. Fans of the EQP1A will be wondering: ‘Does it do that thing where the bass feels like it has become more present and harmonic, but not just louder’ – Yes it does. The high frequencies are effortless – On the mix bus I’m able to wind in a broad 3k boost, lifting the mix up and pulling it forward towards the listener without introducing any harshness or solidity-destroying smearing. The high frequency cut is beautifully natural, exhibiting that same gentle control that this type of circuit is known for. The ‘Pre’ setting is a big part of the analogue signature of this incredible-sounding plug in. It provides that tangible presence and definition that is so elusive in the computer -The distortion that you can’t really put your finger on is here, as it is throughout the Aqua range.

I don’t have access to the hardware to make my own comparisons, so I asked White Sound’s Mastering engineer Tommy Bianchi what his findings were comparing the hardware with Acustica’s sampled model. He told me: ‘White has the same character as the hardware. Acustica has done a great job of reproducing the powerful simultaneous boost and cut behaviour. White (and  Green) has this incredible analogue feel, that makes it as special a plugin as the WSM PEQ 2.0 is a special hardware machine. Both the preamp and curve emulations are very accurate – the guys at Acustica have done fantastic work! The HF section sounds great, but the LF is also impressive. The preamp stage emulation makes the low frequencies stable and precise.’ For those unfamiliar with Acustica plugins, operating them can take a little getting used to. When you change a control the plug in loads new FIRs from an extensive collection residing in your plugins folder. There’s a short but perceptible delay as this happens. You need to work slowly with the UI, making changes and listening for a moment for them to be realised. Those that crave the instant gratification and flexible graphical editing interface of the ProQ2’s of this world will not find that here. Personally I’ve learned to appreciate the change in pace that these designs bring – I find myself listening more carefully to each change I make.

Now, unfortunately you can’t enjoy this sort of unrivalled sound quality without paying a price. Any old machine won’t do, and the higher the sample rate and instance count, the more it won’t do. You need some horsepower, and the nature of the beast is that the more modern your processor, the easier time you’re going to have of it. I struggled with these plug ins on my 12-Core 2010 Mac Pro, not because it didn’t have the benchmark scores, but because it was so out of date. Moving to an 8-Core i7 provided a lot more headroom, and those users on the latest generation 6 i7 chips will get the best results in relation their cores and clock speed. Incidentally, users running Reaper in Windows seem to get the most efficient performance. So it’s hungry, yes, but this is a plug in that you could run one instance of on your mix bus and achieve a great deal of benefit without needing that much available power. Think of it like a piece of hardware. To put it in perspective, you could buy the plug in, and a machine powerful enough to run tens of instances for far less than the price of a single hardware unit of this calibre. The Acustica licensing and authorisation process is…well it’s not brilliant. You have to install the plug in, then create an instance, which in turn creates a file in your plug ins folder with a .SER suffix. You go back to the site, upload the file to Acustica’s server, which in turn emails you a new .AUT file. This you put back into the plug ins folder, relaunch the host and open the plug in again, at which point it should be authorised. Unfortunately it’s a convoluted, and unfamiliar process, which although much quicker once you’ve been through it a couple of times, is enough to put some people off before they can even get the trial up and running. Don’t be put off. Set aside some time to work it out, because it’s worth it. Stay on the path of righteousness and you shall receive great rewards. Or something. So why don’t they change these things? Well, they are doing exactly that. The new system is not active at this stage, but it’s coming. This is a small company, and they are working on it as quickly as possible. Watch this space.

This is something to demo as a priority. Those used to the classic hardware will find a heartwarming familiarity here, and those who’ve never had the pleasure of using the best analogue equipment will have an opportunity to seize one of those moments when everything changes, when things suddenly click, and when audio starts to sound an awful lot like music.

Click here to get your hands on a demo of White 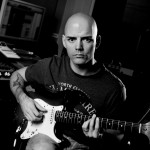 Jack Ruston is an in demand producer, recording engineer and mixer, as we ll as being a level 9000 audio geek!