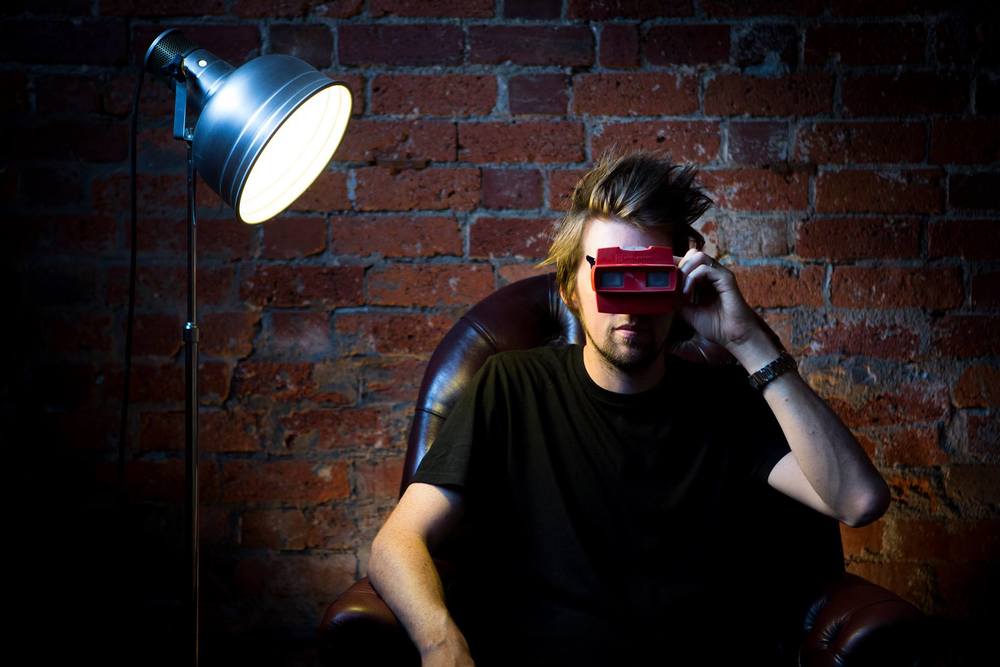 Got 5 Minutes For A Chat? – Nick Thayer

No need for me to give you a rundown on this cat, we all know he’s a fucking legend!!!  Ladies and gentlemen, Mr Nick Thayer!

I use Cubase 8 on a PC. My monitors are Genelec 8040s with a switchable sub (crossover at approx 120Hz). I also have a monitor out going to a shitty old boombox (my cheap version of an Avantone). I tend to write with the sub off, only switching it in now and then to see how things sound blasted. I write at quite a low volume most of the time. Hardware I have a TLA5021 valve compressor which I use mainly as a second stage preamp when using a mic, and an Alesis 3630 which just occupies space. I have a shit tonne of guitar pedals (THREE wah options, five distortions and an array of delays etc). I have my full guitar rig permanently setup too which is a Digitech 2101 and a MesaBoogie power amp. I have a few synths too, my favourite being the Roland SH2000.

How did you get into dance music? What made you take the step into production? Are you a DJ who started producing or producer that started DJ’in? .

I used to play guitar in a bunch of metal and grunge bands, and then one day I went to see The Chemical Brothers and that changed everything. I never knew electronic music could sound like THIS!! Almost overnight I got into producing and DJing. For me the two always went hand in hand. Besides, turntables and software are (marginally) easier to deal with than lead singers. I think being in a band reinforced that dual relationship for me. I always enjoyed playing songs that we wrote more than covers, and I get that same buzz from DJing when it’s one of my own tracks over and above somebody else’s.

What’s an average day in the studio like for Nick Thayer?

9:30 – Guitar jamming along to Metallica or Muse or Queen or White Stripes or whatever takes my fancy. This gets me in a good mood, and gets the music juices flowing.

10:00 – Power up Cubase and go through till about 8pm on a regular day, with a lunch break somewhere. I always try and watch a tutorial or something whilst I have lunch, whether it’s a Cubase or a Waves one, or Pensado’s place or whatever. It serves the dual purpose of keeping that focus, and also learning cool shit.

I listen to as much music as I can, from right across the spectrum. I’ve said a few times I feel the role of a musician is kind of like a sponge: soaking up everything around you that moves you, from music to art to books to whatever, and then when it comes time to write you just squeeze and see what comes out. Musically I’m into pretty much everything. Current top five albums:

Prodigy – The Day Is My Enemy

Bill Evans – You Must Believe In Spring

What is your approach to writing? Do you go in with an idea already in your head or is a more spontaneous approach?

At any given moment I have a grip of notes on my phone, both written and hummed, that are ideas for tracks. Some will be a ‘main’ idea, and some will just be arrangement or drum ideas, so when I go to write there’s already a pool of material I’m drawing from. Generally I will know what I’m going to work on when I get started for the day. Sometimes I’ll get a drum loop going and jam along on guitar. I saw an interview with Brian May (HERO!) where he said that a lot of the Queen riffs were written by Freddie on piano and then transferred onto guitar, which is why they sound so unique. They’re not notes that naturally fall under your fingers as a guitarist. For instance the main head banging riff from Bohemian Rhapsody is in Eb, which is a shit of a key for guitar, but a great key for piano (Eb pentatonic is basically just all the black notes). I try and use this idea in reverse: so a lot of my riffs and melodies and chord voicings are guitar ideas that I then transfer onto synths.

Sound Design – How important is it to the Nick Thayer sound or are all about sampling? In a track how much of it is built with your own sounds? How much time do you spend on pre-production/collection samples/sound design before you start a track? Or do find stuff as you work?

Sound design is incredibly important to me. My general rule (which is of course broken from time to time) is to design the main or feature sounds in a song from scratch. This gives everything a unique flavour. Having done that though I will of course save the channel strip to re-use as a supporting sound in future tunes. I’m a big user (and also a contributor) to Loopmasters when it comes to getting a track up and running. Especially drum loops. I use a lot to get an idea off the ground, then I often go back in and re-program or sometimes re-make them totally. I love superior drummer for this as it lets you get so involved with the sculpting of the breaks. I love ‘found’ sounds too, so I’m often sampling things I hear. I have one of those high quality wav recorders on my phone so any sound that sticks out I’ll record it and most likely use it in a year or so.

Why thank you! The majority of my bass sounds come from Massive, although Serum has been getting a great run recently too. My low end is quite a convoluted process. For a glitch hop or drum step type tune I will use a combination of two or three kicks, with one of them being designed using the Nicky Romero kick plug in. There will then be a sub sitting ‘around’ this doing a super simplified version of the main baseline. Even if the baseline itself is made up of two or three different sounds I take the pressure off them by combining them and using a sub. I’ve included my Massive sub patch here, which has a couple of Macro controls for harmonics (which dial in the second and third above the fundamental depending on where my main bass synths are sitting), and also saturation and ‘booom’. This sub is then sent to it’s own buss. For me it’s super important to lock this with the kick and snare. I try to make it sit tight without using excessive side chain. The ‘bass synths’ which are now mostly low mids will then usually hi pass at around 120hz (with a slope – again – it depends on where they sit) and buss together with some compression and some limiting and then side chained to the kick and snare. Sometimes if these synths have slow release I will add another sine doing the full rhythm sitting with a super tight EQ at the bottom of the low mid range. In this instance obviously I ditch the upper partials on the sub. So yeah, it’s quite a process.

Drums – process on there own or do you group them on a buss and then stick on the effects? Use much compression on them?

Drums I have three busses set up being Kick / Snare / Percs. Each of these I will use compression and EQ to lock those separate sounds together. These then go to a Drum Buss where I use The Glue as a parallel processor. Sometimes too I then set up a ‘Drums Drive’ buss with a super pushed compressor / overdrive and either send the whole buss there or maybe just the kick and the snare. This will sit very low (prob 15-20dB lower than the main drum buss). After much experimenting the trick I’ve found with drums is less compression is more. And remember, if you are bussing drums like this then compression ratios are MULTIPLIERS. So if you have a 3:1 ratio on one of your snare, then a 3:1 ratio on your snare buss, then a 3:1 ratio on the drum buss that’s 3 x 3 x 3 so a ratio of 27:1, which is ridiculous. So be sparing!

I do my own mastering. On my master channel I have something like (in differing orders with the exception of analysers on the way in and out)

Either Ozone 6 or Brainworx mastering

My number one tip for producers (as artists) is to wear your influences on your sleeve. Make the music YOU love. Nobody else has the exact same musical passions as you do, and therein lies your uniqueness, your way to stand out.

Reverb – I LOVE the UltraReverb from Eventide as a ‘feature’ reverb.

EQ and compressor would be the Izotope Alloy as a channel strip. Is that allowed?

What’s your vision for the future of Nick Thayer – what’s YOUR sound moving forward and where it’s going?

My next single is out on May 19th with Tommy Lee and Mikill Pane. Following on from that there’s a bunch of new music ready to fire too. I also have a new project called signal:noize for garage bass music. That feels like it’s come full circle as it draws heavily from that UK garage sound that I loved right when I started DJing. I’m just trying to push myself and make cool music that makes me feel something! I’m also working for some music for a video game right now, and some commissioned scoring work for short films and dance pieces. So a few irons in the fire as they say!