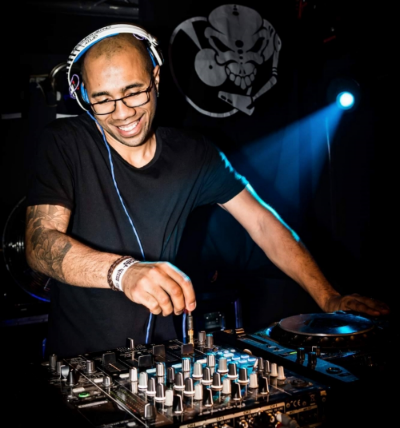 What can we say about this man? With releases on labels such as Ram, Virus and Playaz he’s a member of hugely influential drum and bass duo Optiv & BTK. Ladies and gentleman, let us introduce BTK!

What’s your studio current set up and DAW of choice?

To start with I use Cubase as my main DAW. I have an Intel i5 PC running windows 64 bit 8 GB RAM, I used to have a Steinberg sound card CL1 – USB as a main sound card but not long ago I changed to KRK IRGO which helps me to balance the acoustics of my room, I have a pair of Mackies HR624 MK2 as studio monitors, I also have a Alesis Q88 midi controller that I use to practice my piano lessons. It’s fitted with a nVIDIA graphics card (don’t remember the model). I run it with two display monitors 24″ each for maximum enjoyment, as well as for gaming. I actually built this computer myself with the idea of gaming in the back of my mind as I’m a huge Diablo 3 fan, therefore I had to have a solid computer for gaming, but as it happens I started to write beats on it as well. My latest adition to the “studio” was a Sub Pac S1, been loving it since day 1 and probably my neighbours are very glad about it too.

Whats your first D&B memories? How did you get into the scene?

My first memory is from times when I used to live in Rio de Janeiro and went to see DJ Marky to play at the local club. It blew my mind completely, I stopped playing commercial electronic music as every other upcoming DJ who plays a bit of everything, and I dedicated myself for the past 16 years to D&B. I started to play in Brazil, then I organized parties – I had a regular party night in Rio with my friend called Lucio K called Freak D&B; it was a small night but lots of fun. After that another friend of mine Pedro (aka Marginal Man) and I moved to Sao Paulo and jumped on making bigger events. After quite a few years of djing I thought it’s time to dive into the production, I had my first track released on an American label called Resistance and Barcode under the ‘Identity’ alias.

Worth a mention that I have always been well accepted by the scene and over the years I made a lot of good and true friends. I am delighted to be part of such a beautiful movement.

What’s a typical day in the studio for BTK?

I usually get up between 8 – 9 am , I sit at the PC, have my coffee, read the latest news, open Cubase and get to work. I attempt to bring into being a track every day, if I don’t have anything in the making already. Most of my morning and a vast majority of the afternoon I spend working on ideas.

Name one feature that stands out in Cubase?

As I like to work with audio files instead of VST instruments, I would say that it is the way you edit wav files, extremely easy and straightforward.

Your work with Optiv is regarded as some of the best in today’s D+B scene. How did you first get together in the studio and how do the collaborations work? Do you both start ideas in your own studio’s or do you get in together and knock them out like that? How’s this process going to work with your move to London?

Ed and I used to live in the same country (i.e Switzerland) and bump into each other at parties quite often, it seemed only natural to get into a studio collaboration together. It worked in two ways: Either I started my ideas at home and then I took them to his studio where we finished all ideas together, or at least this used to speed up the process. The second option was that we established some ideas together at his studio and then I would take the project home where I finalized the details. Since my move to London we use VST Connect, which is a great application/extension to work online from two places at the same time.

Let’s talk drum processing. What’s your favorite technique to process drums? Which plugins do you use? Do you process your drums together on a buss or work on them individually?

I use a lot of layering techniques on my drums. I usually have a group channel for the kick, one for the snare, another for all the percussive sounds and one main cluster to keep them together. I tend to use EQ a lot on every channel, bit of reverb, delays, chorus, reverse the samples, etc. I don’t really use compressors on my drums. After watching Audio’s tutorial on YouTube, I began to incorporate CamelPhat with a clean preset that works as a brick wall limiter on that group channel.

You’ve written some amazing d+b tracks over the past few years. How do you keep things fresh and exciting? What influences your productions today?

I’ve never been a “follow the trend” sort of guy, I’m not very good at it. I listen to a lot of other types of music, I believe everything around you influences your music – where you live, what music you listen to, your friends, where you hang out, every fragment of your life shapes your productivity and provides you with plenty of excitement. I could consider myself lucky with my creativity, but I also take the job seriously.

You can only have one plugin compressor, EQ and reverb – what are they and why?

I would have to say FabFilter Pro Q2 – it’s an amazing EQ plugin. I prefer the native reverb plugin that comes with Cubase, and recently I’ve got my head around it’s native compressor as well. It works and fits perfectly with projects I am currently working on.

Working from home has got its advantages and disadvantages. I would love nothing more than to play video games for the whole day, but I stick to an extremely strict routine which enables me to produce regularly and stay on the top of things. I dare to say it is important to acknowledge that this should be viewed as a serious job, especially if you wish to stay active and relevant in the business.

Where do you go from here?

I’ve been studying a lot lately; I dived into music theory and started to learn to an instrument, which, to be honest, I’ve never had a chance to learn when I was younger, I just could not afford it. To keep myself busy I also decided to put a lot more love into my ‘Vinicius Honorio’ techno project. Most importantly I should mention that I am finishing some new D&B material as well and it is something to look forward to.