If you’ve not heard any of PACES music, then you need to check him out. One of the new leading lights of Australian dance, he’s currently one of our favourites over here at Heavyweight Bass. And the reason? His sound is melodic, atmospheric, sexy with plenty of BASS…Very Australian!!

With a new single, Nothing’s Forever due out Feb 13th on etcetc, we thought we’d catch up for a chat…

What’s your studio current set up and DAW of choice?

I use Logic for making tunes and Ableton for performing live and making mixtapes. Gear-wise I’m using a set of KRK VXT8 monitors, an Apogee Duet sound card and an AKAI MPK25 midi keyboard. It’s a pretty minimal setup, I don’t own any cool old synths (I’d like to of course!). Oh and I made the decision to use a bluetooth trackpad when at home instead of a mouse. The reason being that I’m out touring a lot of the time which means making music on planes and in hotels etc, I didn’t want to be hindered by not having my mouse with me. It took about a week to ween myself off the mouse but now i’m used to it and it doesn’t stuff up my workflow when I’m on the road.

How did you get into making music? Share a bit of PACES history with us!

I started out DJing in a group called Surecut Kids. Initially we were scratch / party DJs and then gradually we moved into production. That was more on the trap / twerk end of things though. I started making music as Paces on the side, just experimenting with using as few sounds as possible, making downtempo trip-hop sort of stuff. I was seeing this girl at the time who lived in Melbourne, it was really tough trying to make the long distance relationship work so in an effort to keep busy / sane I made an album for her in this new Paces style that I was exploring. I made a tune every day for a couple months and then picked the best ones to keep. That process really helped me find a ‘sound’. The album was just for her and a few mates, I never released it publicly but that it opened the door to linking up with my booking agent and management etc.

What’s a typical day in the studio for PACES?

Well I treat it like a 9-5 job really, even though it ends up being a lot more than that. So I’m up at 6:30 each morning, make breakfast for my girlfriend, take Chilli (my dog) across the road to the beach for a game of fetch and a swim, then I’m usually sitting down ready to work by 9am.

I try to make some sort of music 5 days a week. If I’m working on an actual project (an original, a remix for someone, or producing for a singer etc) I’ll block out how many days I need in my calendar and try to do nothing but that thing. Emails and life always get in the way a bit but that’s what I aim for. Then in the afternoons (if I have a tour approaching) I’ll spend a couple hours working on / practicing my live show. I clock off when my girlfriend gets home around 5. Oh but I also make sure to post something on social media every day at lunch time and after dinner. And I check my emails like every 20seconds so it never really feels like I’ve clocked off haha!

Vocals feature heavily in your music. What’s your favourite technique to process vocal? Which plugins do you use? Do you record vocals yourself?

Yeah I love a good vocal! Until quite recently I didn’t really know much about processing vocals, I used to just slap a reverb on it and hope for the best. But lately I’ve learned a lot from my homie Atticus Beats. Since we’ve been friends I’ve changed my vocal processing steeze, hopefully for the better! Nowdays I’ll typically do something like this:

Have the lead vocal in the centre.

A couple other takes panned left and right.

A layer of reverb (i use Logic’s Space Designer but whatever your fav is).

A 4×4 delay of the lead vocals, filter a bit off the top of it so it’s not super obvious in the mix, side chain it to the lead vocal so that you’re only hearing the delay in-between the words (don’t want it to clash), then mix that layer in very subtly, just to make the vocal feel bigger (thanks Jimmy Carrostino for that tip!).

Then depending on the voice I’ll also mix in a layer of chorus (I use Acon Digital Multiply).

And to emphasise certain words and phrases I’lI often throw a layer underneath in a few places that’s had the formants taken down 12 semitones. Sometimes I’ll put a mild flange on that too.

Most of that stuff is super subtle though, I don’t want any of the processing to really stand out as an obvious effect. It’s just a lot of little things that add up to a nice full sounding vocal.

You’ve written some amazing bassline tracks over the past 12 months. How do you keep things fresh and exciting? What influences your productions today?

Thank you man! I know this sounds basic but just listening to music is the most inspiring thing. If I’m going to be on a plane, I make sure I’ve got some new mixtapes or something to listen to from artists I love or have been meaning to check out. Then when something jumps out at me I’ll make a note in my phone so I can try it out later.

Another thing that’s influenced my productions lately in a big way is learning some chord theory. My friend Jess has been teaching me and it’s completely changed the way i do things. I used to just noodle around on the keys until something sounded right but now I can get where I want to go deliberately, and know which type of chords feel nostalgic and which ones feel spooky etc. I wish I learned that stuff years ago!

You can only have one plugin compressor, EQ and reverb – what are they and why?

I use the built in ones that come with Logic! Actually I also use Sausage fattener but you can’t side chain that so if I have to choose just one it’s the Logic compressor to side chain everything out of the way.

I don’t use a whole lot of EQ, I just try to pick sounds that fit well in the sonic arrangement. i.e. if there’s a huge bass sound happening, make a lead sound that doesn’t take up any of the bass frequencies. Sounds obvious but when I learned that it was a game changer haha! That sort of thing is important to think about because you can’t fix everything in the mix. Also I get my tunes mixed by you Klaus, so I leave any EQing for you 🙂

And for reverb I like the Logic Space Designer. It’s a convolution reverb, so it sounds a bit nicer in my opinion. I usually just dial in a nice sounding preset and play with the decay time. Short decay to beef up the claps etc and a longer delay for things like vocals.

For sure, this usually works for me: Make a bunch of short tunes, like just snippets of a tune really. Maybe a minute long with a build-up, a drop and a verse. Don’t be too precious about it, just get it done and save it and make another. When you’ve got a few done it will be really obvious which ones stand out. Those are the ones worth spending a few days on and developing. Throw the rest in the trash and repeat.

It’s not worth wasting time trying to force a tune to work, sometimes they just don’t, so this method helps me to be as productive as possible. When I’ve got a few keepers I’ll send them out to vocalists and go from there.

What’s next for PACES?

I’ve got a single coming out on Valentines day called Nothing’s Forever. So I’ll be touring that soon which means putting together a new live set and practicing it a million times! 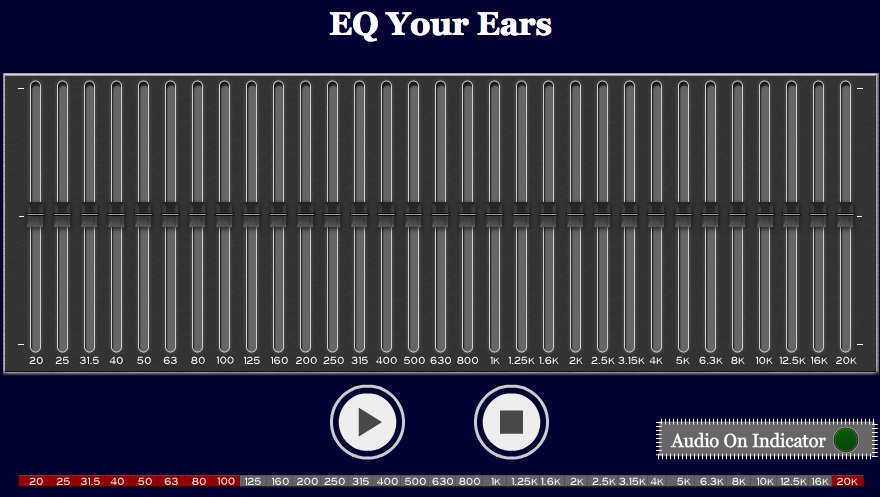 Improving Your Ears – Some Tools To Help You Identify Specific Frequencies

Improving Your Ears – Some Tools To Help You Identify Specific Frequencies
Link up with fellow audio geeks on our Facebook Group Today! Join Our Community Here!