PINNA’S Thoughts – Why should we mix quietly?

Why should we mix quietly?

Mixing quietly allows us to mix for longer periods of time. It’s ok to monitor at higher volumes but only for a short period of time. Usually no more than 30 seconds (especially if you’re listening really loud). When working on the low end you may need to turn it up but for the most part it’s a good idea to listen at conversation level. If me and you were to have a normal conversation where every word could be heard clearly, while the music is playing, then this is the volume you would want to mix at.

Another reason we mix quietly is to allow us to make better judgments on the mix. Things sound great when they are loud but it’s important that they sound just as good when played at lower volumes. Mixing low will force us to create more energy and excitement when loudness isn’t an option. It also makes us be more judicious when using compression and eq. Setting the faders becomes easier to judge also.

Mixing at lower volumes will give us a more accurate image of our mix. It gives us a flatter frequency response. (Look up Fletcher Munson curve) Mixing loud sounds more hyped to our ears giving us a false representation of the low and high end of our mix.

So mix quietly and if it sound good quiet, it will sound huge when cranked! Look after your ears it’s the most important tool you have! 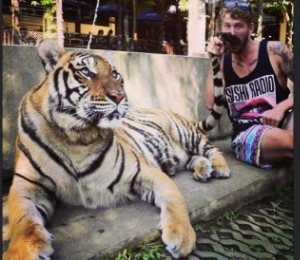 Lee Pinner is a producer hailing from Manchester, England, but now lives in Cairns, Australia. He’s an admin in the Heavyweight Bass Producer Forum and loves furry pussy!