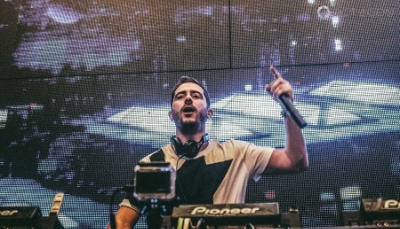 Got 5 minutes for a chat? – Hook N Sling

With his new track, Momentum, available today on Beatport we caught up with old mate Hook N Sling to talk about studio set up’s, his love of a good hook and life in the US. Over to you mate!!

Got 5 minutes for a chat – Hook N Sling

What’s you current studio set up?
Currently I’m working in Ableton and Pro Tools on my Macbook Pro with a pair of Genelec 8050A’s. Bits of hardware i have are and Apogee Ensemble, Avalon 737sp, Neumann TLM 102, Nord 2x and a Moog Voyager Module

What’s a normal day in the studio look for Hook & Sling?

I always try and start at 12..I get all my personal shit done before that….its a routine that seems to work for me.

I usually work till late, like about 11 but I always take a break to eat….and drink coffee…and eat chocolate.

You mentioned to me before that you don’t see yourself as a technical style producer, more focused on the song writing. What is your approach to writing? Do you go in with an idea already in your head or is a more spontaneous approach?

Yeah I mean I get more excited by a well written and produced song than a well designed plugin. I have a lot of ideas in my head and I always try and work it out in my head before I put it down in the studio. Like if I was trying to work out a lead line, I would loop the chords and hum it or hear it in my head before I went into the piano roll to draw it in.

When I write leads and melodies i always keep in mind the total context of the song. You never really hear a song with the same melody over and over so you got to think how you’re going to introduce it and present it to the listener in an interesting way. I always think about these things….thats why when I write, I always sketch out 2 drops and a breakdown within minutes so I have a half completed arrangement to start with. I think I do that so while I’m writing if I have an idea for effect or a baseline I can go to that part of the song straight away and do it.

I always start with some kind of inspiration. Like a record I heard over the weekend or a cool new bass patch I found. Inspiration is everything for me, if I’m not inspired I know I write shit melodies and music so I take a break and look for inspiration. I don’t use many samples but lately theres been a couple sampled elements in the tune that help with the texture. I don’t really make my own sounds unless its something really simple like a detuned saw or sine. I like to go through presets and then tweak…OR I bounce them to audio and mess with them like that.

At the moment I get inspired by a lot of hip hop and urban production. I know it sounds weird but pop and urban music right now is pushing forward more than most ‘underground’ dance records are. I also get inspired easily by good drums. I’m a sucker for a well compressed, well balanced heavy drum groove. I’ve also been going through a lot of early electro house records…like Thomas Schumacher – Heat It Up and Dave spoon – At Night…brings back good memories of being back in the clubs in oz as well.

Do you use much processing on your tracks or is it all about getting the right sound at the beginning?

I don’t really use that much master processing on my master….I prefer to create separation with the right sounds rather than messing with EQ and other stuff later. I use a lot of soft clipping and distortion plugins. Maul is awesome, I got that recently, also CamelPhat, Ableton overdrive and Saturator is cool. Oh and Guitar Rig…I love messing with that.

You can only have one reverb plugin, one EQ plugin and one Comp – what would they be

For reverb I would use the Ableton Reverb…you got great control over what frequencies you want to input, also its light on CPU (in eco mode) and sounds great to my ears.

EQ I would choose the Waves VEQ3. its got all I need to make something sound good…Hi pass, LF shelf and mid and high controls. I use this on all my vocals. I just love how it sounds.

Comp I would have to say the Abelton comp…boring answer I know but I use it so much I know how to get a great sound out of it. And to be honest, I don’t want a tricky compressor with 4000 settings, I mean, its only compression, once you know what to listen for, its not hard to get the right sound.

How’s the move to US been for you?

The move at the beginning was hard, I had no money for the first six months…moving countries with nothing but a couple of suitcases is expensive. I barely had time to work on new music in the middle of getting a social security number, a car, a place to live…setting up all my utilities, buying furniture etc.

But I did a lot of long nights and then at the end of 2012, my record Reason came out with Nervo on Spinnin and things started looking better. I realised moving here that whatever I’d achieved in Australia meant nothing. I was the new kid on the block and had to prove myself which looking back now and writing this I realise how good it was to have that fear…of fucking up and then going back to oz. People would’ve been like ‘oh what happened’ and I probably would’ve lied like most people do in this industry and say…’oh yeah, i didn’t like it over there, i missed home too much so yeah i decided to come home’….I never wanted to have those conversations.

What’s next for Hook N Sling?

I’m so excited about all the new things I’ve written in the last 6 months that are coming out really soon. One of them is 120bpm, another thing sounds like a One Republic record…I’ve been feeling really inspired lately and hanging around inspired people…it makes a big difference. I swear, having a good attitude towards your own music is half the battle. I really believe people have a lot of good music inside them that they don’t let out because they look at the Beatport top 10 and go…’nah, my idea doesn’t sound like that, I should start that tune again…

Momentum is out on Doorn Records 10th November 2014