Got 5 minutes for a chat? – Goodwill

When Dirty South calls you “king of the Southern Hemisphere”, you’ve got to be doing something right! Enter stage diving, 1 million CD selling and all round nice guy Goodwill…

A mainstay at Australia’s largest events and clubs all over the world, you’ll hear his edits, originals and remixes in sets from the Swedish House Mafia to Carl Cox. He’s taken 5 minutes to answer a few questions for Heavyweight Bass.

Were you a DJ that became a producer or does musical talent run through the family? What were your early influences?

My whole family are musicians. I am the black sheep of the family that became the DJ. I became a DJ because I was obsessed with rave culture and because I saw Kid Kenobi getting all the girls.

What was your first release and what label did it come out on?

One of the first was called ‘Go Away Baby’ in 2004. I bet you can’t even find it online! Listening back its pretty bizarre. A weird mixture of hyper pop and house music. I remember going over to the MOS office to perform it with mate Darryl Beaton. They were so baffled by it they put it out.

I know your a big Ableton fan. What is it about Live that makes it your DAW of choice? Any tips you’ve picked up in your Ableton use that you wanna share?

Its really simple to use and sounds decent enough. You can get an idea up really quickly and its great to arrange in. Ive been using it since Version 1 so I know it back to front. Some obvious tips are to always do your DJ mixes in repitch mode otherwise it sounds like shit. Also use the native plugins as much as you can. They are underrated.

What else makes up your current set up?

Are you completely ‘inthebox’ now or do you still pull out a classic hardware unit once in a while?

I use hardware sometimes. Especially EQs. But i hate the lack of recall and it ties you to a studio. I never really had the patience to learn vintage kit. I leave that to Dolso.

Are you a fan of Ableton’s stock plugins?

Yep, they are great. The EQ is great, as is the Saturator. The Limiter has its place as well.

Any little gems you could not live without?

My Sony in ear noise cancelling headphones. They aren’t studio grade but I can finish records in them by referencing things I like. 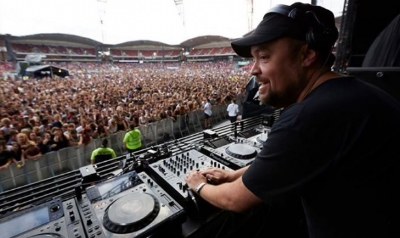 Doing what he does best!

What’s a typical day in the studio for Goodwill?

It used to be relentless. Now I only do little spurts. All my best remixes were done in 5 hours with a beer in hand. Everything I obsess over tends to be ignored and disappoints me.

How many hours a week you doing in lab at the moment?

Not as much as I used to. Ive had a baby. Now my old studio is gone. He is better than house music though for sure.

You can only have one EQ plugin, one compressor plugin and one reverb plugin. What would they be? (give a little reason why with each one)

EQ – DMG EQuality. Cassian put me onto it. Its ridiculous. So transparent and precise. I don’t really believe in alot of EQ though. If the sound needs too much work I just replace it.

Compressor – Sonalksis SV-315. I know it back to front. It is very versatile.

Reverb – Valhalla Room – Nicky Nighttime put me onto it. Its cheap and sounds like a million bucks and is light on the CPU. Im not a big reverb guy though. I use it very sparingly. Nothing shits me more than bad reverb. If the sound already sounds like its in a room I don’t add reverb to it.

What’s the future hold for Goodwill?You got any new material coming out?

Im writing some stuff with Sneaky Sound System and I co-wrote the new Paul Mac single which is coming out soon I think. Im enjoying writing for other people more and more to be honest.

Care to share one pearl of wisdom that you have learnt during your career so far?

Derrick Carter told me to mix quiet as a mouse. Ive largely ignored the advice but I tell everyone so I can drop Derrick Carters name.